In the past two years, with the continuous improvement of display technology and continuous application of innovative application scenarios,  transparent LED screen has become a dark horse in the industry with its high-end atmospheric technological atmosphere, which is transparent. 60%-90% of new LED display screens shine in the fields of building curtain walls, large shopping malls, exhibitions, and choreography. Especially in the current popularity of the entertainment industry, the unparalleled display effect, so that the transparent LED screen instantly became the “minion” of the field of the stage show, highly favored by people in the industry. It not only retains the features of easy control of traditional LED display, low voltage DC drive, rich color difference performance, long service life, but also innovative design to make its texture light, stylish and beautiful, once launched, with a new visual experience and application experience , was well received by the market.

Compared with conventional LED display,  transparent LED screen have obvious advantages in the field of dance and beauty. They are free from the appearance of thick and rigid panels. According to their own inspiration, stage designers can create diverse stage structures and use transparent LED screens themselves. Transparency, thinness, and other characteristics make the depth of field of the entire picture longer, resulting in a dreamlike visual effect, making the audience feel like they are in the situation and bring a strong visual impact. In addition, the dance beauty involves the integration of the light and the picture. The transparent LED screen not only gives the stage design a space for light suspension, but also has its own high-permeability features, so that it has minimal impact on the lighting effects. The LED transparent screen is now generally integrated with the lighting, giving the stage a lively and aesthetic atmosphere, and more profoundly conveys the theme of the show. 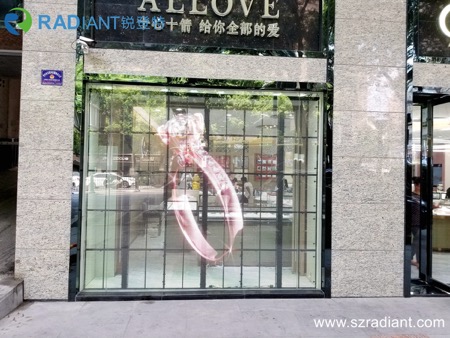 In addition, the exhibition industry is now prevalent and there are numerous exhibition events in various industries. In order to increase booth flow, companies have chosen to set up a stage and use visual impact to attract the attention of visitors, which also provides a huge opportunity for the development of transparent LED screens. Market space.

While the application places are continuously diversified, in order to meet the higher requirements of the end user’s visual experience, the application technology of transparent LED screens in the field of dance is also undergoing continuous innovation. Such as the 2017 League of Legends Global Finals scene, the opening show transparent LED screen and AR technology, so that the ancient dragons soaring over the Bird’s Nest, live three-dimensional picture realistic, for the audience to bring a surreal, dreamy, illusory unique Experience. The integration of new technologies will bring more possibilities for transparent LED screen in the area of dance. It will not only create a wider creative space for stage designers, but will also become a new trend in the development of LED displays in the field of dance.

Breakthrough technology bottleneck transparent LED screen application market can go further
Although transparent LED display is recognized in the field of dance, in terms of current market applications, most of transparent LED screens are used in conjunction with conventional stage screens. The main reason is that they have certain short board problems. Compared with conventional LED display, transparent LED Display is crystal-clear and scientifically pleasing. However, in terms of the west, their clarity and color saturation are far less than the former. Especially under the premise that the viewing distance is continuously decreasing, the performances of the screens presented by the performers are more demanding, and the transparent  LED screen cannot be a single player, replacing the conventional stage screens.

Transparent LED screen manufacturers need to solve the difficult problems, but the current  transparent LED screen market, the domestic R & D strength of the small companies, product R & D technology level is not front-line, in the face of the ever-growing stage of the dance market, who can achieve technological breakthroughs , To achieve mass production, will become the transparent LED screen industry leader. RADIANTLED is one of the earliest companies in China to invest in research and development of transparent led display. At present, it is the main product of three products P2.9, P3.91, P7.8, P10.4, and the cabinet size is 500*500,500*1000. It can also be customized according to customer requirements. In 2018, the company adopted transparent screen as one of its key promotion products. At present, the aging workshop maintains more than 500 square meters of finished products, which can realize rapid shipment. For more information, please contact RADIANTLED website to obtain quotes and more information.